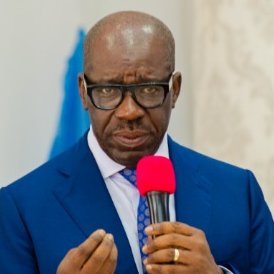 Edo State Governor, Godwin Obaseki has said those he sacked from his cabinet are responsible for his political travails in the state.

Mr. Obaseki said this while speaking at the  Christian Association of Nigeria (CAN), Edo State chapter,  2019 plenary gathering, on Monday, in Benin.   Obaseki who said he was unperturbed by the plots of his political enemies in the camp of his predecessor, Adams Oshiomhole, also noted that he is a governor that believes in action and was not ready for distractions.

He said there was no developmental plan handed over to him by his predecessor, but he plans to leave a 30-year plan behind in the state.

“The fight you are seeing is that those I sacked are the ones fighting back. They are the ones that said they will make Edo ungovernable for me. They are preaching bitterness and practicing evil.

“You have seen that despite the fact we are earning less, we are doing more. I will not take government money for personal use. I told them if they want to kill me let them kill me. That money is for all of us. I want to do more for the people.’’

Speaking further, Mr. Obaseki vowed to ban the Niger Delta Development Commission (NDDC) from executing project s in the state without clearance, adding that most of the roads done by the  NDDC in the state a few years ago are nothing to write home about currently.

“People may not remember that before my inauguration, you could not build a house in Bénin. I know that for the better part of 15 years, you cannot drive through Bénin City because people have sold road to traders. In my administration, things must  be done the right way.”