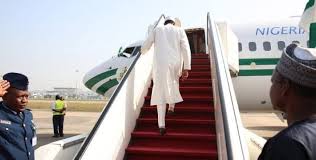 The Senior Special Assistant to the President on media and publicity, Garba Shehu stated this in a statement on Sunday.

The  third edition of the Future Investment Initiative is slated  for October 29 to 31 with  the theme; ‘What’s Next for Global Business?’.

of the Two Holy Mosques, King Salman bin Abdulaziz of Saudi Arabia and

premier, chairman of the Council of Economic and Development Affairs

The conference is focused on utilizing the investment to drive growth

More than 4,000 delegates from over 90 countries are expected to

participate in the FII 2019, which will also host 12 workshops on

Buhari will be accompanied by Governor Babagana Zulum of Borno State,

Also on the entourage are Minister of State, Foreign Affairs, Zubairu