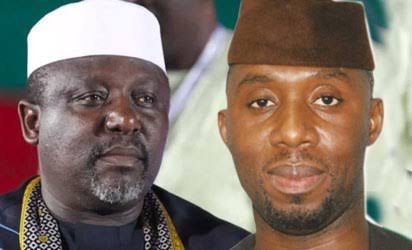 A video clip showing an attempted assault on the daughter of immediate past governor, Rochas Okorocha, and Imo State AA gubernatorial candidate’s wife, Mrs Uloma Nwosu, which surfaced on Friday has since left the social media space abuzz with different reactions.

In the video, a man was seen stretching out his hands towards the daughter of immediate past governor of Imo state during a loot recovery search in Owerri.

MERIDIAN SPY however brings you exclusive findings on the incident after its investigations.

Mr Anyawu Amarachukwu, the chairman, task force sub-committee on Okorocha’s loot recovery, has come out to deny the allegation stating the video in circulation was doctored to garner sympathy from the general public.

When contacted by MERIDIAN SPY , Mr Amarachukwu said he only pushed off the mobile phone used in videoing he and his team members by Mrs Nwosu and that he never laid his hands on her. In his defense, he claimed he did so, having warned Mrs Nwosu repeatedly not to record the process, to deliberately stop the video recording with her phone.

“How can I lay my hands on Uloma when I have a wife and mother ? I didn’t beat or touch her; it was only the phone she was using to video us that I pushed twice to stop her from recording the search”, he said.

According to Mr Amarachukwu, Mrs Uloma  arrived the location where the property was kept with her armed policemen who she claimed were assigned to her from the office of the IG and some thugs. She asked the police to start shooting just to scare the task force men from doing their job. Nonetheless, when she saw that the men were unrelenting in doing their job, she brought out her mobile phone and started videoing  them.

He protested and warned her to stop her action but she insisted. Angered by Uloma’s insistence on videoing the process , Anyanwu said he had to use his hand to push the phone  downwards with force.

Mr Amarachukwu therefore confirmed to MERIDIAN SPY the video was doctored and some parts were taken out.