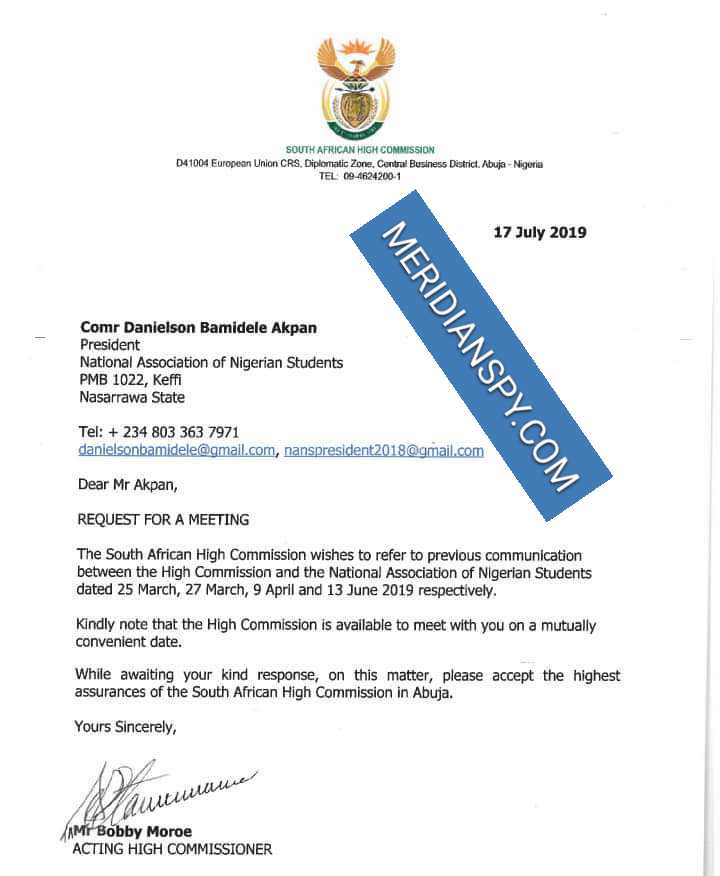 The past few weeks have been embroiled with calls, warnings and some actions by the National Association of Nigerian Students (NANS) over the killings of innocent Nigerians in South Africa.

The NANS National President, Comr. Danielson Bamidele Akpan had warned the South African government on the possible reaction the association would take following the continued killing of Nigerians in South Africa. The organization has since launched a campaign against South African firms and commodities in Nigeria urging its members and the general public to boycott them until the incessant killings of Nigerian in South Africa is brought to an end.

Comr. Akpan, had announced that he had stopped using his MTN mobile line pending the end of the killings in South Africa. Akpan also urged Nigerians to also do same. NANS, as part of its intervention move, had addressed a press conference where it issued an ultimatum to the South African government over the killings, and threatened a complete shut down of all South African firms and outfits in Nigeria should the killings continue.

Having greeted with fear, the South African High Commissioner, Bobby Moroe, following the insistence of NANS to react to the killings, wrote the NANS President pleading for a meeting between the High Commission and the organization.

The letter which is dated 17th July, 2019 was made available to MERIDIAN SPY on Thursday and was duly singed by the Acting High Commissioner, Sir Bobby Moroe.

The NANS president, Comr. Akpan however, declined audience with Mr. Moroe and his team stating expressly that although the organization had written the commission for a meeting in March , but as it stands, the reasons for the meeting had been overtaken by time and events.

“The reasons for our letter of request for a visit to you, the earliest of which was dated 25th March, 2019, had been overtaken by events and time due to the continued killings, maiming and maltreatments of Nigerians in your country. ”

The NANS President however made it clear that the organization would only oblige the commission’s request for a meeting when the killings and other related maltreatments meted on Nigerians in South Africa are addressed completely.

“We will be open for a meeting with you when these incidents are addressed firmly,” he noted.