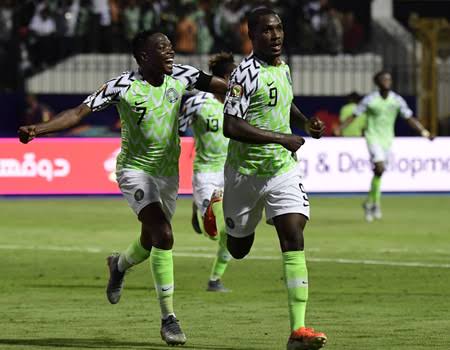 The Super Eagles of Nigeria has on Wednesday secured a semifinals place at the ongoing 2019 African Cup of Nations in Egypt. The Nigerian national team tackled it out with the Bafana Bafana of South Africa at the Cairo international stadium Egypt.

The match which kicked-off by 8pm was both suspense-driven and important to the both sides.

A change in the game came immediately Samuel Chukwueze scored the opener with a cool finish beyond goalkeeper Ronwen Williams in the 27th minute to put the Nigerian side ahead.

The Bafana Bafana boys after some hectic trials found the net through a quick header from Bongani Zungu in 73 minutes of play thereby dashing out the hope for victory for the super eagles.

The match continued with a renewed suspense after Chukwueze’s opener and Zungu’s equaliser which came in the 27th and 73rd minutes respectively.

However, the straw that broke the Camel’s back against the Bafana Bafana boys came in the 89th minute with a brilliant shot from  William Troost-Ekong for the super eagles.

William Troost-Ekong’s goal sealed it up for the eagles as the team secures a semifinals place at ongoing AFCON tournament in Egypt.

The Nigerian team would have battle the winner between Algeria and Côte d’Ivoire  at the semifinals.