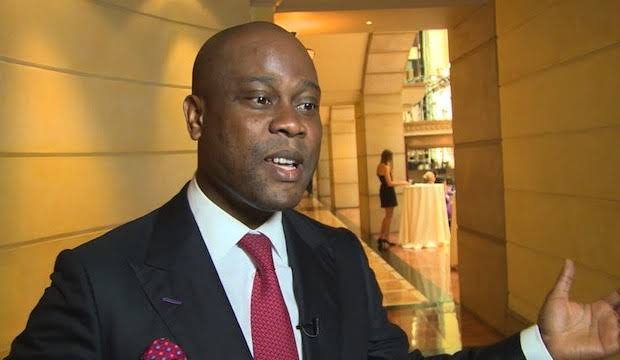 Herbert Wigwe, Chief Executive Officer of Access Bank PLC has said financial institutions are waxing stronger, scaling through the tides partly because of technological revolution in the industry; which had brought substantial ease in carrying out its operations.

While  acknowledging the level of growth and development ‘’artificial intelligence’’ has brought into the banking industry, Wigwe said , there would be an overwhelming impact of the former  in not just the banking sector, but also in Nigeria’s economy at large in the next 50 years.

Wigwe who spoke as one of the distinguished speakers at 2019 Disrupt Conference of Africa Fintech Foundryt (AFF), which was sponsored by Access Bank Nigeria, on Thursday in Lagos,  said, the world is currently experiencing its fourth industrial revolution which came by way of the internet and cloud technology via different phases of automated processes.

He attributed smooth financial transaction processes between the bank and its customers to the advent technological revolution in the system, noting that the introduction of mobile and internet banking and Automated Teller Machine, were some of its impacts.

At the conference, Wigwe noted that technology-driven financial institutions will disrupt traditionally-run banks by taking advantage of any inherent weaknesses in their business models by offering their customers much -valued services hinged on modern technology.

“Some 30-40 years ago, bank tellers used adding machines to check the addition of bank deposits. Then, they used ledger cards, posted nightly, to keep track of account transactions and balances.

“That was the period that if you needed cash or you needed to make a deposit, you visited your bank and hoped there wasn’t a long line of people waiting to do the same thing. Those were the days of “tally numbers” when, on your way to work, you had to stop by the banks then to pick up your “tally number”, and return during lunch break to carry out your basic cash transaction,” he said.

Wigwe said Africa has joined other developing countries of the world in witnessing technological advancement in its financial institutions.

“With the prolific opportunities digital banking brings, banks are now competing on the nature of innovation that can provide solutions, handle and predict customer behaviour in an incredible fast manner.

“Even though Banking has come this far, the future holds a lot more than what the past has ever held. Leveraging such technology, as artificial intelligence and utilizing data analytics is imperative if Banks and Fintechs are to remain competitive. Today, becoming an intelligent bank is not anoption, it’s a necessity,”  he said.

“Thanks to automation technology, banks and Fintechs are able to grant credit in seconds. Artificial Intelligence reviews legal documents. A manual review of 12,000 documents use to take 360,000 hours, but today, this can be done in seconds using Artificial intelligence.

“Blockchain can be used to execute smart contracts, eliminating manual costs of transactions! Robotics technology is used to serve customers in Banks. Only one decade ago, we could not have imagined such advances.

“And there is so much that can be done with Data. Big Data Analytics helps an intelligent bank understand its customers. This data categorises customers and analyses their behaviour and needs. Such understanding improves product development and enables effective cross and up-selling.

“Cloud Technology has also been a game-changer for Banks. It reduces server and infrastructure costs which is most appreciated in a country like Nigeria, where power generation is expensive, and its availability is not usually guaranteed. It enables the delivery of work from any location, where programmers can be based in multiple countries yet be working on the same project,” he further noted.

He also noted that the presence of social media has created strategic opportunities  for banks  in the area of advertisement.

“In this sense, banking has become much more tailored and personal. Intelligent Banks partner with critical stakeholders to expand the frontiers of their business. For example, the opportunities that exist from partnering with Fintech’s are enormous.

“Imagine instant cross-country payments between businesses who do not necessarily have a presence in those countries. Imagine third parties connecting to API’s to open accounts and making instant international payments. And partnering with Fintechs offers Banks an opportunity to earn revenue from transaction sharing.”

He said Access Bank was aware that Artificial Intelligence is the new path in banking through the offering different opportunities to enhance convenience for its customers.

He said:  “We are in constant pursuit of being the best possible Intelligent Bank. Our applications of intelligent banking range from the review of legal documents, to conversing digitally with our customers.

“What about applying for a loan and receiving disbursement instantly! What about paying bills from the comfort of your sofa! Or making bank transfers instantly using your web device, knowing your account balance instantly, accessing statements and locating branches by chatting with a BOT.”

Brett King, futurist, author and Chief Executive Officer of Moven UK in a keynote address titled: “It is the technology that changes the world, it is the dreams behind the technology,”said by 2025, there will be a larger presence of robots than human beings.  He also encouraged that human beings should begin to learn how to be nice to robots.

The Conference which had different  Fintech startup players and  emerging experts in attendance, featured panel discussions, live presentations, demo, fireside chat and masterclasses.  It was the second edition, and the largest Fintech conference in Africa so far.